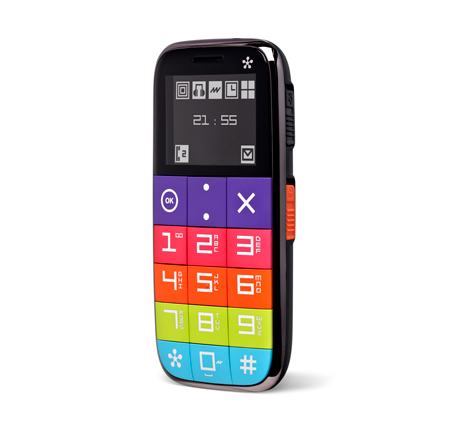 Latvian company Just5 developed mobile phones primarily for elderly people and young students. With its large symbols and buttons, the design of this type of phone is very convenient for those with weak sight and for those who might prefer a simple design. The keyboard, which occupies the complete front panel, includes large-sized and well-distinguishable symbols. Additionally, the mobile phone has the ability to send SOS communication—instantly calling programmed numbers—and to block calls from unwanted numbers easily by using its slider-switch feature.

The success of the simple mobile phone for elderly is due to its extreme difference from the contemporary, highly technological smartphone. As the exact opposite of its traditional competitor, the phone’s minimalistic design and reduced functionality drew a great deal of attention. The advantage of this very different alternative is its relatively low cost and high reliability. With this popularity, the CP9 was no longer viewed as the “Grandma Phone” or only purchased as a secondary “emergency” device.

At its release, the Just5 CP10 proved to be just as popular as its predecessor. Although there were no noticeable new features, the phone did undergo outer changes to its exterior for the newer model: the size of screen is increased, its shape is more rounded, and its body is made from a softer plastic. The main difference between models is the addition of Viber, an instant messaging service, which was specifically added to the model. Other features, such as a lantern or flashlight, FM radio, and not requiring headphone sets, remained the same.