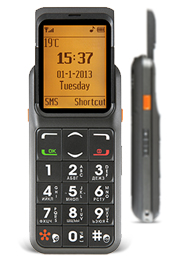 Latvian mobile phone company Just5 officially presented the new model of its GSM cell phone. With large buttons and minimum functionality, this cell phone is named Just5 CP11 and is the third model of its kind—the CP09 and CP10 phones were released at the end of 2009 and the beginning of 2010, respectively.

Just5 CP11’s unique feature is its remarkable screen. Compared to the 1.6-inch screen of previous models, CP11’s screen is 2.2 inches in size, which makes it an excellent cell phone for seniors. The main difference, however, isn’t the phone’s screen size but its construction. Unlike previous models, the display is hidden into the housing of the device. By simultaneously pressing two orange buttons located along the sides of housing, the screen “jumps out” upward and opens for the user to access.

Besides the unique screen conception, model CP11 is equipped with a sensor that detects external temperature, an organizer, an extended menu, and a table charger.

Here are more details about the Just5 CP11 cell phone for seniors: